The next three sentences in Gary’s list concern rain:

Rain is tadan, another class II noun, but with a singulative suffix, so really tadan is ‘raindrop’. In the collective/plural, it is tadna.

Falling is motion downwards, using tɨŋi. With rain, the downwards part can be left off.

I said that tadya was no longer prefixable, but I think it will be possible to simply say tattɨŋi (tad+tɨŋi) and mean “It’s raining”, literally “it’s moving downwards”. Any other usage of tadya with tɨŋi, though, requires the formations above.

aŋi means to move to a large, diffuse destination. Prefixed with aŋi, it means to move about in a location (here, the rain). gyɛdɛ ‘game’, in the source slot and sessile, is indicating a purpose for the rest of the sentence. So the kitten is moving about in the rain for the purpose of a game.


“The tūmse is playful in the rain.” 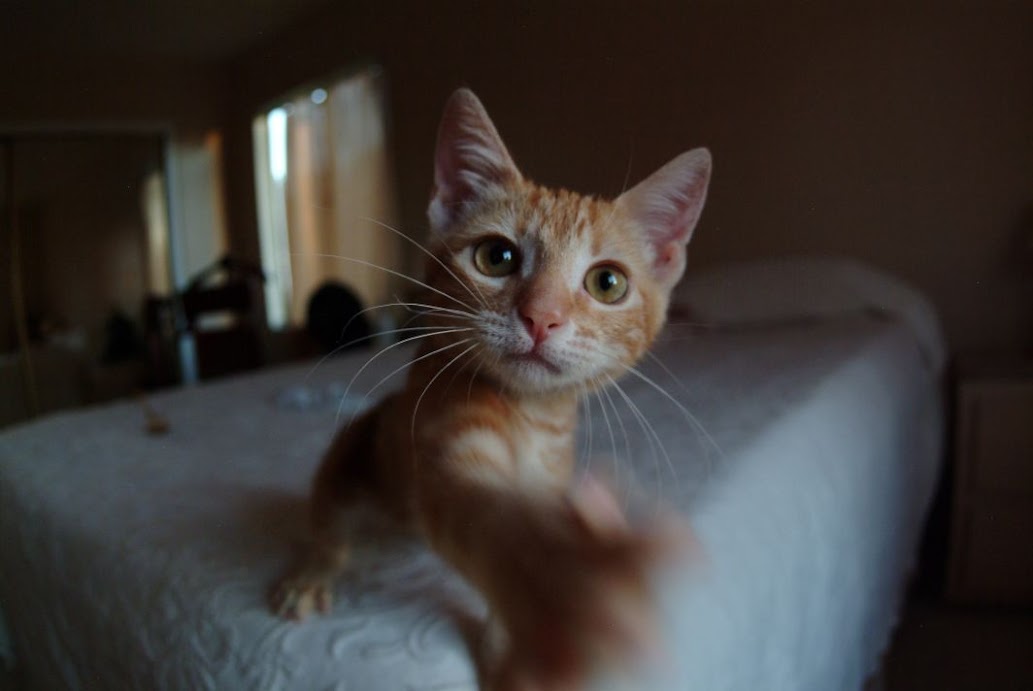 The next three sentences in Gary’s list have kittens:

I have to confess that as much as I love cats, the Kēleni don’t have them. 🙁 I have not yet decided if the people who speak sodna-lɛni have cats as pets, but I think they will, by fiat. Even if it ends up not making sense. OK, so a word for cat and for kitten. Class II with the other animals….

idɛl for ‘cat’ and iddɨse for ‘kitten’. Those are motile singular forms.

tɛbɛ ‘table’ is the destination. Destinations are always sessile.

In sodna-lɛni one would only specify ‘my’ in contrast with ‘yours’ or ‘his/hers’ or such. So I left it out of 17. And we have a third verb: pɛsi which means to move away from a required source. Since source is grammatically required, I added one, making “The little kitten moved away from me.” And it is in the sessile to denote that I didn’t send the kitten away. I am just another location in this sentence. Sources in previous sentences were motile, implying a degree of agency.

The next four sentences in Gary’s list have people shouting:

And they have quantifiers!


The paucal source and singular shout in 11-13 says that the people shouted together at the same time.

The next set of sentences in Gary’s list are still discussing the sun:

OK, sentence 8 adds an adverb, 9 an adjective. 10 is another time distinction, and a change of subject (in sodna-lɛni anyways).

The adjective lo is modifying loho because a) adjectives follow nouns, and b) it’s also in the motile singular.

Look, a new verb! tɨŋi is actually the most basic verb in sodna-lɛni. It means to move (along a path) possibly towards a destination, possibly with a point of origin, but neither of those things are required.

ala is another time adverb, and generally appears in the source slot.


“The sunlight is bright.”


“The sun is bright.” Kēlen doesn’t have adverbs, just adjectives.

The next set of sentences in Gary’s list are:

OK. More tense and aspect distinctions. sodna-lɛni doesn’t actually distinguish tense (this is an experiment on my part), which means that there is no difference in 3 and 5.

dɛga
FUT
in the future

dɛga
FUT
in the future

tavi is the perfect form of evi.

dɛga is the future modal, and it denotes certainty in one’s prediction.

rēha
FUT
in the future

(And, yes, the words for ‘tomorrow’ in both languages are related.)

Now, for me, the difference between the two sentences is that the first is in the habitual and the second is in the progressive. OK. No problem. sodna-lɛni makes that distinction:

logɨdiya is the class IV noun meaning ‘light, rays of light’ in the motile plural. It’s the subject of both sentences.

loho is the class II noun meaning ‘the sun’ in the motile singular. It acts as the source or point of origin for the subject. It can be motile because class II nouns are higher up in the animacy hierarchy than class IV nouns.

evi is the verb in use. It means that its subject is moving out in all directions from a grammatically required point of origin. In the first sentence evi is in the iterative, and in the second, the imperfect.

In Kēlen, the two sense are conflated and the easiest way to express the concept is in the sentence: